Greetings! Last week I was struggling with yet another totally new stuff - implementing Cypress component tests and then dockerize it all. I went through a lot of posts, links, and videos to filter it all out and somehow put it together. So I thought maybe I could make a very minimalistic project as an example for other pilgrims out there.

First run npm install in root directory. Run cd tests. Run npm install in Tests directory. That should fill out the missing packages into node_modules. At this point, the project is already set up so from Tests folder, you can run Cypress tests with just basic docker-compose up.

But lets look at it first in more detail.

The frontend is a super minimalistic react app, nothing fancy or special. Just notice using id from props in Square and Button components. Those are important in Cypress tests.

Cypress is set in the way described on the Cypress webpage Here . So simple npm install cypress --save-dev command.

Also added { "baseUrl": "http://localhost:3000" } into Cypress.json for use from inside the tests when running Cypress tests locally.

Otherwise, I would say the tests themselves are pretty standard and basic. To actually learn Cypress tests I used this tutorial . It’s very fast, so you really need to pay attention, but it’s directly from a Cypress guy, so it’s a great source.

To run tests from Docker, you can just run the afore mentioned docker-compose up . But let’s look closer on the dockerfiles used. Great source I used as a base is Cypress blog - Run Cypress with a single Docker command .

.dockerignore - here I just ignore Tests, node_modules and Dockerfile, because those are not necessary.

I think that the most interesting is docker-compose.yml in Tests directory, so let’s go through it:

For convenient shutdown after the tests complete, you can use: docker-compose up --abort-on-container-exit --exit-code-from cypress

For a quick help with those parameters, run docker-compose up --help .

And that’s how it’s done.. well, how is make a foundation stone for this workflow anyways :)

If you want to dive deep into Docker, I can wholeheartedly recommend Maximilian Schwarzemuller’r course on Udemy: Docker & Kubernetes: The Practical Guide .

Github repo with the project 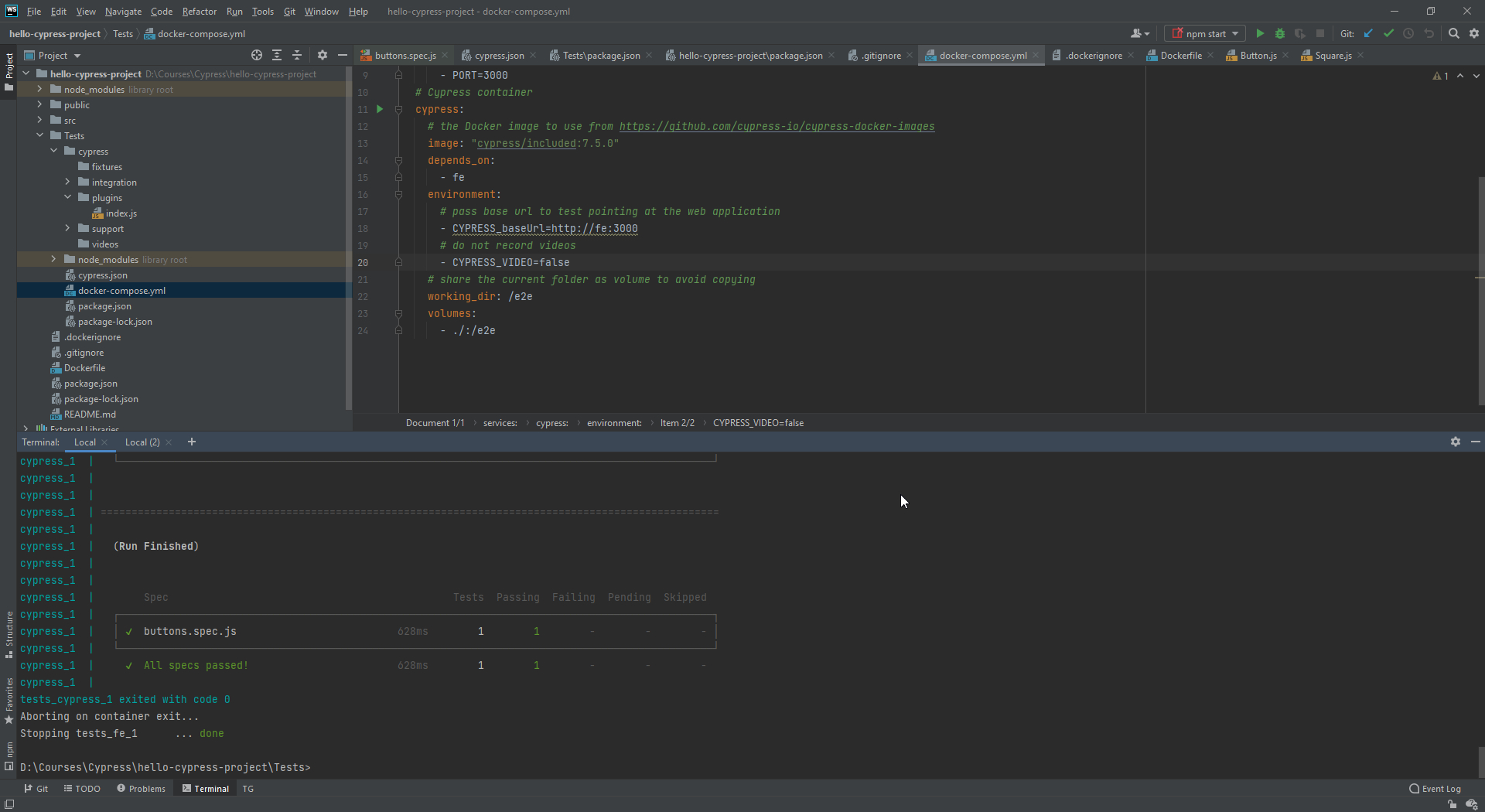